The infamous plug cap or should I just say it’s the famous issue? Anyway, my Hyosung’s plug cap has been cracked and I’ve just clocked 4128 KM! Yesterday, my bike was jerking if I ride below 4K RPM and this was very annoying as Naza claims this issue has been fixed on the newly 2014 bike.

The new plug cap which is still the same brand called Golden is said to better insulated plug cap (from 20% to 30% Rubber), increased temperature (250 to 270 Celsius) compare to the previous version.

First I thought my plug cap could be an older version, I went to NAZA SC in Shah Alam today and the guys confirmed it is the newer version! Anyway, they kept my cracked plug cap and they might send it over as a sample to S&T Motors in Korea for further analysis.

I forgot to capture the image of the cracked plug cap as I were busy chatting with other riders! 😛

As the picture below, the only changes I’ve made to this bike is installing new TBR Silver Series muffler (Original). Could this be the issue of the plug cap cracked? TBR Muffler is widely installed on Hyosung bike (Special Edition or TBR Series) in Malaysia by NAZA. 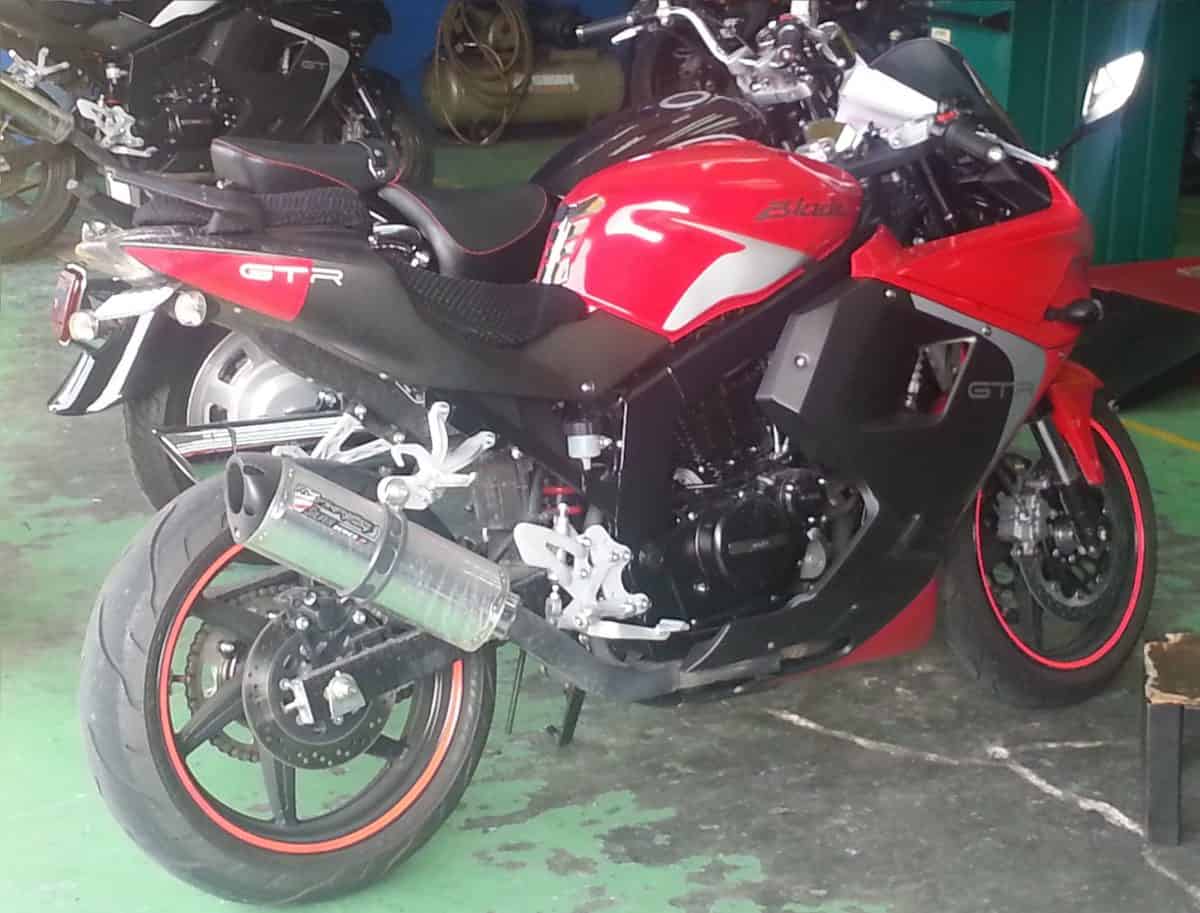 For backup, I purchased another 2 plug caps, RM 35 each just incase it cracked or break down again.

So what are the symptoms?

-Bike will be jerking if you ride below 4K RPM
-Unstable RPM when the bike is Idle
-Unstable sound or noise from the exhaust pipe.

How do you differentiate the newly improved plug cap with the older one?

It’s easy! The newer version has a shining material finishing, just like a gold dust on it.

Looks like Naza have to request much more higher qualities Plug cap for Malaysian blade owners especially due to our country’s temperature?

To be honest, I heard some riders are using Suzuki’s plug cap which is said to be better than the stock ones. If this plug cap issue happens again, I might try Suzuki’s one.

Finger crossed that it will be fine as I’m planning to go Thailand on June for Sadao’s border bike week.

If you have any questions, drop them at the comment box below and feel free to share this article via the social buttons.

Hi, i have 650 blade, got the jerking issue like unstable fuel flow. Then it went to show FI light multiple times before sudden engine cut off. Since then it wont start. Is it due to plug cap?

Is it jerking below 4K RPM? If yes, then most likely. Cheers

Happen to me Blade April 2014 bought it, near 5K broken 1pcs, now 10K same happen again =.= not sure 1pcs or 2pcs, this is not bad luck but true manufacture defect or didn’t follow malaysia spec. Lucky happen near my house, engine suddenly off mid of road, before that felt something wrong already. if happen in middle of highway jam, u will gg.com. 1st time ok, coz got deal with shop, any prob with bike they will towing foc. Now if inspect same thing, they will charge me RM 90 for towing, then plug cap RM55 [email protected]#$%. Called Naza… Read more »

Hi Fadzli, sorry for the late reply. Well I got mine broken twice actually, just after 5-6K. I always keep spare under my seat and when it broken, I can replace it myself. I think you should do the same. Well calling Naza SC can be a real pain. You might itself want to contact Bard from RZM Motor, they are helpful. Details can be found at the link below:

Thanks for the info. Here pic plug cap cracking recently I kept. http://i.imgur.com/hD2epNe.jpg Btw, found my home area Kajang had Bike shop, selling plug cap for Naza Blade. I was called the shop, saying our customer using Yamaha model and so far ok. I was hmm, wanted to try rather use stock from naza. After reach shop, they only have 1 pcs left, i hope can change both, the existing one mine broken 1 pcs, then no choice i have to use back naza cap 1 unit. Haiz…this cap a bit small, didnt snap pic… Earlier i forgot to ask… Read more »

Sorry you’ve had such problems. I would suggest that you get the revised version of Plug cap from Naza SC in seksyen 15. The newer version has a shining finish as the picture above. The one you’ve sent in the picture is the older version. It should be RM 35 per piece. Give it a try and see how it goes. So far, it has been fine for me, 10K KM and still running. Cheers

So u change new one both shining version is working fine?

Ok, I will try your suggestion. Bike warranty? my bike reach 10K then this problem raised. Haiz…i think warranty either 1-2y or 10K KM only. Now warranty under AEON another 10K. Btw the shop saying, the warranty cover Engine not accessories part. haiz….

My bike has done about 3000 km and yesterday the rpm on idle is unstable a bit. Is this a plug cap issue ? Can I still ride to work and later to the shop to be checked and replaced ? (to work and shop is about 80km). Thanks.

HI Mike,
Yes it could be a plug cap issue. If you ride below 4K RPM, does the bike jerks? If so, you will need to replace with a new plug cap. If you’re in budget, you can try to get an electrical tape (Black tape) and roll over the plug cap. It will do the trick, but this is just a temporary solution.

This morning i removed the plug cap and inspected it but could not see any visible cracks on it. After riding for 20km its started to jerk like no fuel when riding slow about 4k-5k rpm. I will try to put the electrical tape (I always carry one on my back pack) and hope it can get me home today.

You need to be aware there are 2 plug caps. One at the front and the other just below your bike oil tank. Give it a go by using electrical tape and see how it goes. Failing that, you will need to get a new plug cap. Get the newer version from Naza else you can try Suzuki Belang ones. Cheers

The one below the fuel tank has a small scratch (I guess this could be the crack) I tapped it with the electrical tape and there was no problem after that. Thanks for the advise bro.

I’m Glad this has worked for you. Cheers Mike

hi bro is me again.. it will be awesome if u upload some video of ur new tbr silver series.. i would love to check out the sound of it..thx bro

I’ll upload it in a week time. Cheers

I just chged the plug cap, now got newer version, very thick one, rm110 one pair.

Hopefully it will be better. Cheers

We are committed to safeguarding your privacy. You are not required to provide us with any personal information as a Visitor.